Veteran readers of my macro commentaries, from Points of View at HSBC, to Hot Topics at Braemar, Macro Topics at Affinity and Macro Macchiato here at Shipping Strategy, will know my thesis that shipping has been the indispensable enabler of globalisation.

The world’s ship owners have provided mostly cheap, mostly safe and mostly reliable transport of raw materials and goods without charging charterers the full environmental cost of moving their stuff around the world from extraction to processing, manufacturing, distribution, sales and customer fulfilment locations.

Without a free, independent international shipping industry, the free trade agreements that have been the poster children for globalisation would have been impossible. Global supply chains would have been considerably more expensive, just as restricted cabotage always and everywhere proves to be.

All of this was conducted under the auspices of the World Trade Organisation, a body which is suffering death by a thousand cuts. In the 12 years since the global financial crisis, the WTO;’s one-size-fits-all approach has been rejected in particular by post-industrial societies whose nationalist, populist want to bring back manufacturing jobs, hard borders and an authoritarian ‘rule of law’ comprised of misty-eyed false reminiscences about a more secure past from which war, hunger and poverty have been conveniently erased.

Trade still goes on of course. The second part of my long-held thesis is that trade will find a way. Thus, manufacturers and assemblers have moved from China to ASEAN nations for the export of goods to the US, giving President Trump cause to complain about how harshly Viet Nam has been treating poor defenceless Uncle Sam. Political analysts write more frequently about the decoupling of global supply chains: one for China and its sphere of influence, one for the US and its allies. Australia has been most keenly feeling this, and investors in its iron ore miners may have one eye on Chinese investments in iron ore mines in Latin America and West Africa.

The flip side of this is that trade becomes less efficient. This may in fact work in ship owners’ favour as the duplication of supply chains may require more ships to produce the same supply chain effect. Whether the benefits independent ship owners depends on how the supply chains are organised. For instance, China now controls around 16 per cent of the world’s dry bulk and oil tanker fleets, and the third largest liner company in COSCO Shipping Lines. It already pays for certain commodities in RMB and in a decoupling scenario it may well insist on paying for freight in RMB. This may naturally benefit Chinese ship owners and their allies over truly independent ship owners. In other words, in a fully decoupled world, ship owners may be forced to pick sides.

Another consequence of the slow demise of the WTO has been a rise in regional trade deals. The biggest was to have been the Trans-Pacific Partnership, but the US pulled out of that. The China-ASEAN Free Trade Area was from 2010 the biggest in population terms for a decade. The Japan-EU Economic Partnership that entered into force on 1 Feb 2019 was big, covering 635 million people and a third of the world’s GDP. The United States-Mexico-Canada Agreement (USMCA), which entered into force on July 1, 2020, covers nearly 500 million people and the USD 23.5 Tn combined GDP of the US (USD 20.5 Tn), Canada (USD 1.7 Tn Mexico (USD 1.2 Tn).

All of these deals have now been overshadowed by the Regional Comprehensive Economic Partnership (RCEP) that ASEAN, Australia, China, Japan, New Zealand and South Korea signed on Sunday 15 November. Incidentally, the deal was the first to be concluded virtually, with a number of signatories all appearing by video link. The RCEP’s 20 chapters cover goods, services, cross-border investment, e-commerce, intellectual property and data. It covers USD 26.2 Tn of combined GDP, 2.2 Bn people and 28 per cent of existing global trade. The RCEP would be even bigger had India not withdrawn last year over concerns for its politically predominant domestic agricultural sector (16% of India’s 2019 GPD but 42% of employment).

China’s Premier Li Keqiang described the agreement as “a victory of multilateralism and free trade.” Under its terms, tariffs are not removed immediately but will be phased out over twenty years. And, crucially, the ‘rules of origin’ are equal for all countries within the deal, meaning that members can conduct tariff-free cross-border assembly within the RCEP.

Significantly, China believes that the RCEP will facilitate its ‘dual circulation’ trade pattern. This recognises that China has now passed the stage of its development that was facilitated by mass employment of cheap labour in factories exporting to global customers. The success of that model has led to a 12-fold increase in Chinese manufacturing wages in ten years. China is now a middle-income country and is increasingly an importer of not only raw materials but finished and semi-finished goods. Chinese corporates will increasingly offshore labour-intensive manufacturing to countries along the Belt and Road such as Pakistan, Bangladesh, East Africa and Central Asian republics. The RCEP will lower tariffs on China’s imports from a number of those countries.

The signatories must now ratify the deal in their domestic parliaments before it enters force, and signatories have extended an offer to India to join at a later date. That should be a formality held back only by domestic parliamentary schedules. Shipping should over time enjoy a multiplier effect, with containerised trade especially growing faster between RCEP members, though it’s possible that agribulks, gases and petrochemicals will also benefit strongly. I wonder if anyone in the UK government could be distracted for a few minutes from their factional in-fighting to take a few notes….no, didn’t think so. 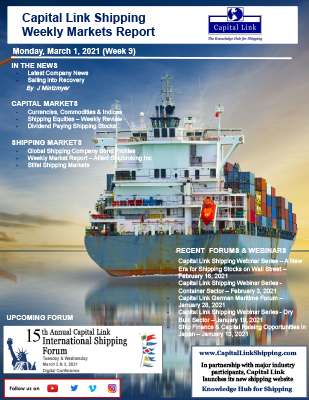 GSL – Balancing the Duration of Charters to Reduce Volatility &...