This week, I spoke as part of a panel discussing the energy transition and its effects on the offshore shipping industry, part of the Seatrade Maritime Middle East 2020 event. Apart from missing out on a trip to somewhere warmer and sunnier than the UK at this time of year, I enjoyed a high-quality discussion with Eleanor Midwinter of Wikborg Rein and Martin Helweg, CEO of P&O Maritime Logistics.

The offshore oil and gas industry has had a bloody time of it in the last few years. The arrival of shale oil and gas from continental US producers brought a lower-cost competitor to the market. Low energy prices for most of the last ten years have slashed margins and cut back exploration and production budgets, meaning many previously attractive projects have been delayed or cancelled. Platform operators have had to scrap and lay-up expensive assets, lay off highly qualified and experienced staff, restructure debts, and cross their fingers that the downturn will eventually end.

Coronavirus made things worse. The slump in oil demand combined with the Saudi oil-bomb to saturate markets with cheap crude, making most offshore production unprofitable. Oil prices have recovered to around USD 50 a barrel but most offshore projects require a long-term outlook of above USD 70 a barrel to be viable, and more importantly to be finance-able.

Some offshore assets are still viable, if they are priced correctly. The US this week auctioned 518,000 acres of Gulf of Mexico sub-sea real estate, for a total of around USD 121 million. Ten years ago that price might have been well over USD 1 billion.  Buyers were trying to dollar-average their overall portfolio while keeping one eye on a Biden presidency that will probably cease offshore licencing for the coming four years.

Beyond that timescale, the global energy industry faces the prospect of peak oil demand sometime in the next decade, if it has not already arrived. And while natural gas seems to be more acceptable than oil environmentally it is still a hydrocarbon to be replaced if the world is to avoid catastrophic increases in temperature.

If the offshore oil and gas industry looks like going the way of the dinosaurs, the offshore renewables industry offers the prospect of a shining new future.  The global offshore wind market is on the cusp of booming, to be followed by offshore solar and wave plants, plus combined Power-to-X plants producing hydrogen or ammonia from surplus electricity during off-peak demand then delivering that as fuel or converting it back to electricity via fuel cells when required.

Shipowners with a focus on servicing the offshore exploration and production industry face the same challenges of decarbonisation their assets that the entire industry faces, but also the risk of their customer base either disappearing or being transfigured from producing gas and liquids to electrons or their carrier gases and liquids.

So it was interesting for me today to hear some of the key issues that are currently live in the offshore market.

The energy transition is going to put the offshore shipping industry in a sack and shake it in the coming decade. But a new offshore shipping market will fall out  – one based not on hydrocarbons but on renewables. It’s an exciting challenge for those brave enough and smart enough to engage with it. 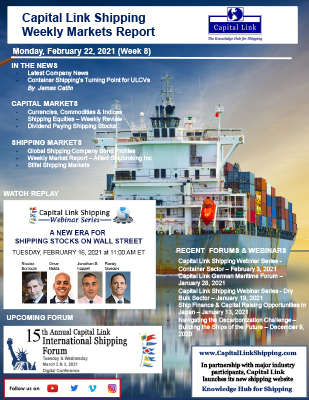