This was a busy week for me; lately my two favorite topics seem to have merged. That paragon of mainstream media (one of my faves), The New York Times (NYT, not one of my faves), wrote a nasty article about that paragon of shipping’s decarbonization (the other fave)- the International Maritime Organization (IMO). Among other things, the NYT quoted someone who referred to it as a club for old sailors; importantly, they also described a situation where an IMO delegate was refused entry into a meeting due to a dress code violation. No, this was not that must-read “Style” section.

Normally, I would rant about “the image of shipping”, or similar, and then move on, but it’s probably not appropriate right now. The maritime business (along with multiple industrial sectors) is facing a series of pivot points. The problem is that we don’t know which way to pivot. Do we pivot to hydrogen, ammonia, methanol…or something else entirely? And who will pay for this pivot?

As I wrote in a commentary distributed within hours of reading the NYT article, “The NYT does touch on some important realities and real issues facing the IMO.”  My first concern is that the IMO targets may not be aggressive enough to appease national interests. The Glasgow Climate Summit is now six months away. Recently, the Biden administration has been talking tough on year 2050 emissions targets for industries generally (with shipping mentioned specifically). With these events looming, the IMO decarbonization targets pale in comparison to what will be discussed in Scotland, and the trajectory of IMO proposed measures to get shipping’s emissions down suddenly does not seem steep enough.

My second worry (Yes) concerns carbon taxes and their close cousin, Market Based Measures (MBM- carbon offset trading and the like). In my opinion (or “IMO”), there needs to be one central system, which I’ve suggested ought to be administered by the other IMO- the subject of the NYT article. Shipping is a worldwide market, and putting shipping into regional carbon trading schemes  (alluded to by the NYT) would just fracture a business that is struggling to get to a uniform consensus on emission reduction. The CEO of Maersk, Mr. Soren Skou, has suggested a carbon add-on in the realm of $150/ton (add that to circa $300/ ton for the fossil fuel). Others have come up with numbers as high as $250 for the carbon part. My concern is that one marketplace will be tough enough; imagine the lack of clarity if there are multiple trading venues. This is not the stuff of arbitrages and spreads, sorry guys.

There is some good news…maybe. The U.S. has recently joined “Mission Innovation” along with other governments (and industry influencers) which would promote research into clean energy solutions. By the way, shipping is targeted by name (with its own smokestack icon) in this initiative -which dovetails with the Paris Climate Change accord. The boys (and girls too) from Copenhagen are all over this mission- not a bad thing actually because they could play a leadership role in getting the “decarb engine” going. In a recent presentation at the World Economic Forum, Mr. Skou from Maersk stressed the importance of emission reductions to the line’s biggest customers (think about purveyors of name brand consumer items)- who are now holding transport providers’ feet to the decarb fire. They are demanding that the carriers lower emissions. The $4 trillion question is whether those well known, and well resourced, customers will pay for the carriers’ efforts.

I also read that Maersk has teamed up with a solutions provider to create an “Emissions Dashboard”- tracking emissions across a customer’s (yes, Walmart and Costco) supply chains. “If you can measure it, you can manage it”- as they say. I would add to that maxim, “…and if you can manage it- then they can pay for the pivot.” But for the IMO, and for the industry generally, there’s much work to be done. 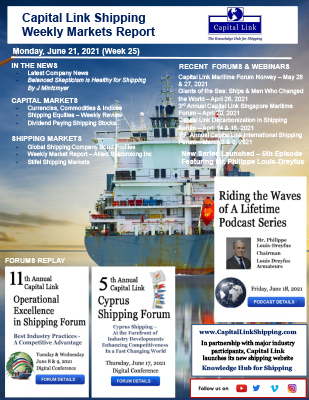