Here is a snippet into the perils of making forecasts in this crazy year. Shipping’s outlook is profoundly impacted by big trends on the demand side; these, in turn, are influenced by economic factors- but also by political developments. I have enough trouble with the basics- the various shipping sectors’ supply and demand interplays. Back in the day, we had combination carriers to mess up forecasts; today we have “slow steaming”- some things don’t change! Geopolitics- I absolutely love chatting with experts, but I get a headache when trying to apply their thoughts to shipping.

In the past week on Tuesday, the New York Energy Forum, a group of thought leaders that meets regularly, hosted an online session looking specifically at the U.S. election and the likely impacts on energy policy.  The two online presenters know their craft- both bring decades of Washington, D.C. experience with polling, analyzing political winds for the business sector, and advising candidates on strategies. Though neither expert was asked to predict the actual outcome of the U.S. Presidential race, both suggested that it could be extraordinarily close, with a strong potential that the U.S. Senate (presently controlled by the Republicans- the party of Donald Trump) could flip over to Democratic control.

For the regulatory environment facing the energy sector, where Big Oil has clearly been struggling, one expert expressed a view that “Biden will pick up where Obama left off…a Biden administration would roll back many of the deregulation initiatives of Trump,”  and offered that fracking (importantly, not completely opposed by Biden-even in the face of Democratic extremists who had pushed for a complete ban on fracking) would face more difficulties. He noted that Congress determines policies on oil and gas;  “You’d really need to strong full sweep <meaning further gains in the House- and a flip to a clear majority in the Senate) from Democrats to tinker with that.”

The second expert offered that: “Of all the changes coming, if Biden wins, <we could see> with the largest allocation to renewable energy in history…”. He talked about the renewable initiative as a “huge priority for a Biden administration.”  Of interest to the tanker boffins, he suggested that a Biden administration would take a more conciliatory attitude towards Iran, saying, “There is a very real possibility of Iran coming back on stream as a legal exporter of oil over the next couple of years.” He suggested that, if Biden wins, policies towards the energy sector would be “…the complete opposite of what we have today, in every respect.”

Fast forward one whole day to Wednesday- in an unforecastable turn of events, President Donald Trump signed a Presidential order extending an existing oil drilling ban off the Florida Gulf coast, out 10 years, to 2032. Additionally, he now ordered the ban to be extended to Florida’s Atlantic Coast (think about Jupiter- where Trump made his announcement, Fernandina Beach and Ponte Vedra , and to the neighboring states of Georgia (St. Simons and similar), and – farther up the Atlantic coast, South Carolina (think Pawley, Kiawah, Hilton Head, and Blufton).  All good spots, by the way, for ship-spotters.

There is some calculation here. Florida and Georgia, where many residents (especially in coastal areas) oppose offshore drilling, are considered “swing states” in the upcoming election. The beach areas are big tourist destinations, and memories of the Deepwater Horizon spill, now 10 years ago, are on the minds of coastal residents. Interestingly, the Trump ban also comes at a time of huge energy surpluses in the face of dramatically reduced demand- so that it has little or no negative impact on U.S. efforts at “Energy Independence”, a key theme for Trump. As recently as late August, President Trump had directed the Department of the Interior to a review an Obama-era plan that restricted offshore leasing (in the Atlantic, but also on the West Coast and in Alaska). Ironically, the Trump administration is now using the same provisions that the Obama administration used to prevent drilling in the Arctic regions.

Oh, by the way- on the Thursday- Charleston, South Carolina (great for ship-spotters) just announced that it was suing “Big Oil” in the state’s court, on climate change issues. Try to forecast all that! 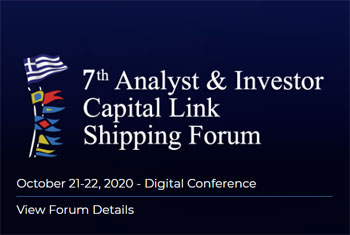